Time and Place of Incident concentrates on the killings of media journalists in the Philippines, with the country being considered as the world’s second most dangerous place for journalists after Iraq. Dalena’s show involves documentation footage taken by her and volunteers at the grave sites of these journalists as well as shots showing selected places of their assassination. Believing video to be a powerful medium in conveying loss and injustice, the exhibition features Dalena’s stills and videos beaming through multiple projections in the given venue of the museum.

NOTHING TO DECLARE (NTD), an international art project aiming to contribute to contemporary discussions on migration. NTD@Vargas is one of a series of three exhibitions. Artists were selected from more than 100 submissions who responded to the Call for Proposals sent out in 2010 by a board of organizers and curators composed of Flaudette May Datuin, head curator and project leader(Department of Art Studies, College of Arts and Letters, University of the Philippines), Josephine Turalba (Dean, School of Fine Arts and Design, Philippine Women’s University) and Precious Leano (Executive Director, Filipino Visual Arts and Design Rights Organization or FILVADRO).

…In remounting this exhibit, we do not merely wish to recoup lost exhibition time. We wish to stress the importance of a vigilant engagement with art practices, be it in terms of producing objects, performances, or texts, or in the varied relationships and interactions that constitute the field of art. It is with this vigilance as well as the possibility of discourse and criticism upon which it is founded that we are able to render the field of art legible and cogent, give it conceptual shape and gravity, and make matter out of so much light and space.

The Aquilizans work together as a couple, parents and artists. Though they pursue individual creative vocations, their collaborations dwell on their everyday life within a family and the duty of raising their children. These experiences inflect their work with collective habits, or habits of collection — and also of belonging.

In Address, they use boxes laden with the personal effects from their homeland. This may well be a farewell scene in which the process of migration becomes poignant and the lost object of country is salvaged in pieces. It is caught between the anticipation of a beginning and an unsettling of origin or address — between expectation and alienation.

Flesh reflected on on the myriad interpretations of the female body in art and language featuring the works of Sandra Palomar and Nolet Soliven, and materials from the museum’s library and archives. Both artists try to intimate the trajectories of representing the female body in art: from line and contour to mass; and from entirety to parts suggesting the marked presence of photography in the latter half of the 20th century.

Engaging in a dialogue with the works of the two artists is Richard Ewell Elkins’s Manobo-English Dictionary published in 1968 from the Vargas Museum Library collection, a sound installation by Palomar, and another work from the Vargas art collection, Antonio Dumlao’s Sultana.

In this project, the classic tension between purity and danger emerges more potently because it intrudes on space in which another form of anxiety takes place: between intimacy and estrangement, anonymity (facelessness and uninhabitedness) and incursion. All this settles on an uneasy calm in the pictures of this project in which the workers stealthily smuggle in a toy grenade in the homes they keep for employers whose secrets, whose interior life, they probably know to heart. It is said that a third of the Philippine population is out of the country, keeping the economy on an even keel by sending back home around 18 billion dollars a year in remittances. The body of Filipinos is a ticking migrant force in the inner sanctum of their masters.

Placard: Signs of the Times
06-25 July 2011
Basement and museum grounds

Placard: Signs of the Times collects more than a hundred placards produced by visual artists and people’s organizations: signs and slogans historically used to convey messages and calls for social change. The show examines placards as a form of material culture and as a mobile conveyor of protest.

The show also marks the closing of People’s Art: Shaping the Society of the Future, a conference of progressive artists, cultural workers, and media practitioners from 5-6 July 2011 at the UP College of Mass Communications, organized by CAP, Habi Arts, and the New York Committee for Human Rights in the Philippines.

c_rafts examines personal stories, collective memories and survival in times of calamity. Salvatus, who used to live in España in the Sampaloc area, departs from his encounters and experiences of Manila floods. Focusing on the ravage of typhoon Ondoy that hit Metro Manila in 2009, it probes the ties between the public and the private, survival and threat, game and play. Rafts made out of everyday objects make the viewer re-think perceptions on fear and doubt in relation to the instinct of surviving a disaster. Through these objects, multiple layers of relations and functions are crafted and constructed, further exploring the idea of consumerism, security, urbanism and everyday politics.

Part of CANVAS’s Looking for Juan program, which explores art as a vehicle to discuss social concerns, seeks out Rizal on the hero’s 150th birth anniversary. Where is Rizal in our time? How do we feel his presence? Artists of different generations remember him as a man of many sympathies and therefore open to be claimed by many causes. He is hero, surely, but he is also native of his season, citizen of his country, icon to a multitude, revered name to a nation. That we have taken liberties in making Rizal our own is testament that he has come to belong to us quite intimately, and we recall him out of habit, or with fondness, in a gesture of holding him – and ourselves – to the promise of heroism.

The exhibition features the numerous monuments installed in honor of the National Hero all over the Philippines and abroad. Images from personal and institutional collections, works of contemporary artists (Denis Lagdameo, Kawayan de Guia, and Manny Migriño), film, documents and archival materials survey the various forms and styles through which Rizal’s image is articulated, and explores the multitude of meanings and sentiments evoked by his ubiquitous presence in public spaces as well as in the Filipino’s consciousness. 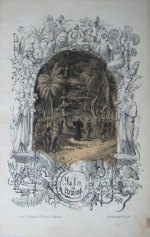 Enchantment of Affinities references the line el demonio de las comparaciones (phantasm of semblances) used by Jose Rizal in the novel Noli Me Tangere. Rizal used this phrase to recall a discrepancy between an empire’s vitality and the lifelessness of the colony. This “spelled the temptation of distance and the promise of affinity”.

Enchantment of Affinities foregrounds the dialogue between the “displaced sensibilities” of the video artist, a Filipino artist based in Madrid and Oviedo, and Antonio del Canto, a writer who sets his mystery novel in the Philippines. Coming from different periods, both allude to the difficulty of “passage” and the “unease of settling”.

Echo Studies reflects Taniguchi’s practice in the “sublimation of the intersections in information sharing and research”. It focuses on how the researcher’s decisions, sensitivities, and process continuously challenge scientific objectivity in the creation and manipulation of data. Employing sound, video, painting, drawing, and installation, the artist probes relationships among subject, representation, and process. Echo Studies also foregrounds the artist’s notion of the tropics through a recent work in Romblon, an island south of the Manila known for marble production.

Al Manrique (1949 – 2006) was a visual artist, activist and one of the core members of the 70s Social Realists. His works are metaphors of the struggle of the workers and the urban poor. The figures of torso, arms and hands, which oftentimes emphasize the veins, symbolize the resistance in the bondage, the relationship between labor power and repression, and the articulation of freedom against oppression. 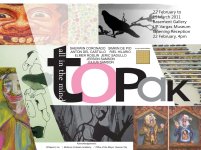 Artists in this exhibition find common ground—each has suffered anxiety, depression, stress, or trauma in the past seven years, disrupting their artistic practice. This psychological disorientation is topak. Drawing on the complexity of the emotion, participating artists work on images that represent their struggles and negotiations during such an encounter. While translating their struggles in visual form, the project reflects on artistic process as psychological, cathartic, and to some extent, spiritual.

The project provides an alternative space where artists can dialogue and where experiences can converge. With the process of artmaking and exhibition as platform, episodic experiences of topak are recounted to confront the social stigma attached to it.

At the closing of the 19th century, Manila, as a new American colonial city, received massive urban transformation aimed at concretizing America’s imperial imagination in the tropics. This imperial ambition drove the colonial authorities to structure Manila’s urban built environment as a model colonial outpost. This urban revision was initiated to facilitate efficient colonial governance and to signify the power and prestige of the new colonial order. Manila, perceived by the colonist as a pathologic space, became the vortex of colonial urban reengineering that systematically transformed the city into a sanitized, ordered, and regulated domain so structured to enhance the flow of economic activities. (G. Lico)